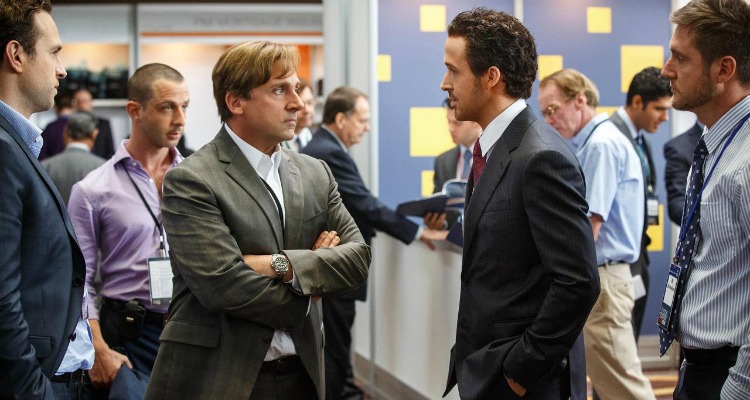 10 things you need to know about The Big Short

‘The Big Short’ is released in Irish cinemas this week. Directed by the man who brought us ‘Anchorman’, ‘The Other Guys’ and ‘Talladega Nights: The Ballad of Ricky Bobby’, Adam McKay, this is a rare foray into drama for the director. Based on Michael Lewis’s book of the same name, the film focuses on four people who predicted the property bubble and subsequent crash, and who decide to take on the big banks for their greed and seeming lack of foresight.

Starring Ryan Gosling, Christian Bale, Steve Carell and Brad Pitt, ‘The Big Short’ has already been tipped for awards glory, so Movies.ie have gathered together 10 facts about the film.

1. First time for everything
As well as being Adam McKay’s dramatic debut as a director, ‘The Big Short’ is also the first film McKay has directed that does not star Will Ferrell.

2. Terms and Conditions Apply
Author of the book ‘The Big Short’ is based on, Michael Lewis, says that director and screen writer Adam McKay was only allowed to make this film if he agreed to make a sequel to ‘Anchorman: The Legend of Ron Burgundy’.

3. Reunited
‘The Big Short’ is the second time that Ryan Gosling, Marisa Tomei and Steve Carell have starred in a film together. The first was 2011’s ‘Crazy, Stupid, Love’.

4. Second Time For Everything
In ‘The Big Short’ Christian Bale plays investment banker Michael Burry, this is the second time he has played a character with this job description, the first being ‘American Psycho’.

5. Cameos
As well as a star studded cast, keep an eye out for cameos from Selena Gomez and Harley Quinn herself, Margot Robbie.

6. The Show Must Go On
Christian Bale sustained an injury just before ‘The Big Short’ started filming. Director Adam McKay wanted to use a double for the scenes where Bale drums and swims, but the actor insisted on doing the shots himself. As a compromise, McKay had two doctors on standby in case anything happened to Bale.

7. Previously…
Brad Pitt stars in ‘The Big Short’, the actor previously starred in another film based on a book by Michael Lewis; ‘Moneyball’. Lewis also wrote the book that the Sandra Bullock film ‘The Blind Side’ was based on.

9. Recreation
As well as filming in New York and New Orleans, the production crew recreated the offices of failed investment firm Lehman Brothers in the lobby of the New York State Department of Financial Services in Manhattan.