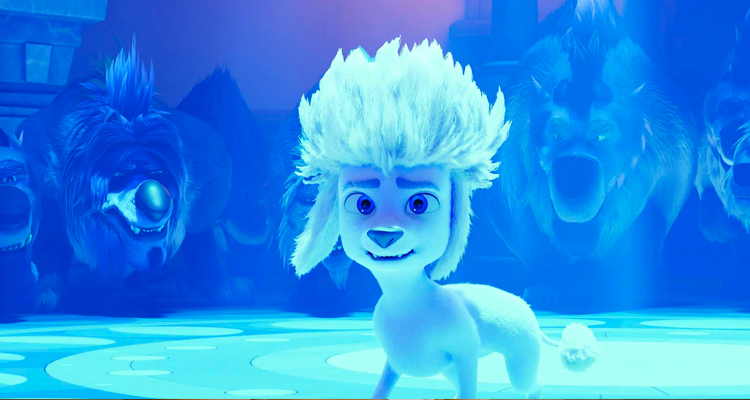 The Plot: Young Freddy Lupin (Ilai Swindells) has a lot to live up to. His family is descended from a long line of werewolves. Not the kind that like to rip, tear and kill… but the gentler, good-natured kind that like to rescue people who have late-night mishaps. His family are not overly fond of dogs though. Having lost his beloved father Flasheart (Jai Courtney), Freddy must now become the High Howler. However, his transformation goes awry and he ends up as… a poodle. To return to the family fold, he needs to go on a dangerous quest accompanied by stray dog Batty (Samara Weaving) before time runs out…

The Verdict: Australia is known for many memorable cinematic offerings but animation is not something that quickly comes to mind. There have been some animated charmers like the stop-motion Mary And Max. Now we have the CGI-driven family feature 100% Wolf. Adapted from the children’s book by Jayne Lyons, it’s a coming-of-age story about a young man’s journey into adulthood… if only he could get it right and live up to his respected father’s legacy. Freddy should be turning into a werewolf but instead he ends up as a poodle with a pink shock Rod Stewart hairdo. Much hilarity and hijinks ensue as he’s pursued by other werewolves, stray dogs, a mad scientist and an even madder ice-cream vendor with revenge on his mind.

There’s a lot to take in here in over the course of this feature-length Looney Tunes-style outing, which holds fast with its chunky if somewhat rudimentary animation style. Maybe too much even for short attention spans. It might be more ideal as an animated TV series in shorter, more digestible segments. The script, which lists some five contributors, is a mad-dash hodge-podge of cuddly horror, cutesy animals, science gone wrong, a hero with daddy issues (that one again), toilet humour and everything else in between. It’s all rather barking mad… but in a mildly acceptable way that makes its Aussie eccentricities all the more endearing.

There are oodles of imagination on display here, from the hulking werewolves to the wildly-rendered human characters to the changing environments around the city and country. It’s a film that is constantly on the move, with director Alexs Stadermann ensuring that the film isn’t boring even when it’s bewildering. For a children’s film, there’s a predictably corny message about what’s inside that counts and honouring the family that doesn’t do it any favours. In another iteration, this might have been more edgy and thoughtful like a Laika Studios production. Instead, 100% Wolf is only 50% effective because it’s a dog on the loose whose owner can’t quite reign it in under control. It doesn’t quite know what to do with itself. It might keep housebound kids entertained for a while though.