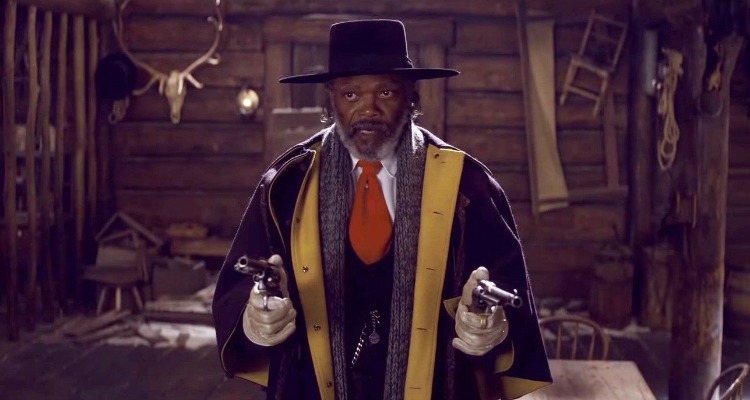 10 things you need to know about THE HATEFUL EIGHT

The eighth film by Quentin Tarantino is released in Irish cinemas this week. Focusing on a group of people including a wanted woman, two bounty hunters, a former General and a man who claims to be the new Sherriff who are forced to hole up together to ride out a blizzard in the Wyoming hills. Of course, this being a Tarantino film, it is not long before secrets are revealed and the gang turn on one another.

1. Leak
After an early version of the script for ‘The Hateful Eight’ was leaked online in early 2014, Tarantino almost published the story as a novel instead. However a live reading of he script in April 2014 convinced Tarantino to keep writing the script, and to make it a movie.

2. Inspiration
In an interview with Deadline.com, Tarantino stated his inspiration for ‘The Hateful Eight’ came from 1960s Western TV shows, saying “What if I did a movie starring nothing but those characters? No heroes, no Michael Landons. Just a bunch of nefarious guys in a room, all telling backstories that may or may not be true. Trap those guys together in a room with a blizzard outside, give them guns, and see what happens?”

3. Casting
It was rumoured that Viggo Mortensen was petitioning Tarantino for a role in ‘The Hateful Eight’, but it is unclear which one. In the end, Tarantino cast a few old collaborators – Samuel L. Jackson, Tim Roth, Michael Madsen – and some new faces including Jennifer Jason Leigh and Channing Tatum.

4. Music
Famed composer Ennio Morricone composed the soundtrack for ‘The Hateful Eight’; his first work on a Western in over 30 years. As well as this, Morricone’s work on the film makes it the first film by Quentin Tarantino to have an original score, although he had previously used Morricone’s work in ‘Kill Bill’, ‘Inglourious Basterds’, ‘Death Proof’ and ‘Django Unchained’.

5. Filming
Cinematographer Robert Richardson, who previously worked with Tarantino on ‘Kill Bill’, ‘Inglourious Basterds’, and ‘Django Unchained’, filmed ‘The Hateful Eight’ on 65 mm film, using Ultra Panavision 70. It is the widest US release in 70 mm film since ‘Far and Away’ in 1992; ‘The Master’ was only shown on 16 screens in the US.

6. Big Screen
In preparation for the film’s release, Tarantino arranged for approximately 100 cinemas worldwide to be retrofitted with anamorphic equipped 70 mm film projectors, in order to show the film as he intended.

7. Heavy Weight
The 70mm version of ‘The Hateful Eight’ is a cinematic monster in itself; the physical film is spooled on 20 reels with a combined running time of 187 minutes and weighs in at over 250 pounds.

8. Not only, but also…
As well as wanting audiences to see ‘The Hateful Eight’ in 70mm where possible, Tarantino has also created a version of the film to be shown digitally, which has different versions of some scenes, and does not have the Overture and Interlude seen in the 70mm version.

9. At last
Although Quentin Tarantino and Samuel L. Jackson have worked on six films together; this is the first on which Jackson has received top billing.