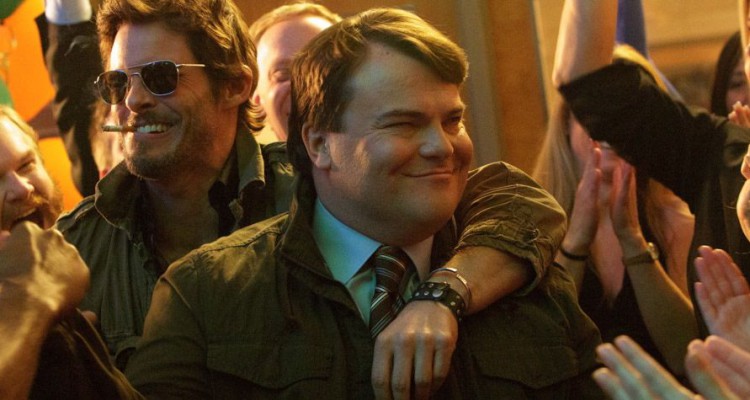 10 things you need to know about THE D TRAIN

This week, THE D TRAIN is released in Irish cinemas. Starring Jack Black and James Marsden, the film is the story of Dan Landsman (Black), the head of his high school’s alumni committee who, in an effort to make people want to attend their 20th high school reunion, reaches out to the most popular guy in the class to ensure his attendance.

To celebrate the film’s release, we have gathered together some facts that you really out to know about THE D TRAIN.

1. Lawless
The film was originally titled LAWLESS, after the surname of James Marsden’s character, and in the early pre-production stage, Bill Hader was reportedly in talks to star.

2. Reunited
As well as Black and Marsden, the film also stars Jeffrey Tambor, Kathryn Hahn and Mike White. White and Jack Black previously worked together on SCHOOL OF ROCK.

3. Producers
As well as starring together in THE D TRAIN, Mike White and Jack Black also produced the film through Black’s company Electric Dynamite, and White’s RipCord Productions.

4. Debut
THE D TRAIN is directed by Jarrad Paul and Andrew Mogel in their directorial debuts. The duo also wrote the film. Prior to THE D TRAIN, Paul and Mogel wrote YES MAN, and Paul had acting roles in KICKING AND SCREAMING, BEWITCHED and TV’s MONK.

5. Shut Down
The film was originally financed by a UK company, who didn’t come up with the money in time. Sony stepped in to help out, and to save the film from being shut down in production.

6. Fun.
Andrew Dost, member of the indie rock band Fun. and former member of Anathallo has composed the music for THE D TRAIN.

7. Soundtrack
As well as Dost’s music, the soundtrack for THE D TRAIN includes ‘Turning Japanese’ by The Vapors, ‘A Little Respect’ by Erasure and ‘Never Tear Us Apart’ by INXS.

8. Shooting
The film was shot in Louisiana, around Metairie and New Orleans. Due to Jack Black’s busy schedule, filming was completed in just 21 days.

9. Sundance
THE D TRAIN premiered at the Sundance Film Festival in January this year, and was released in US cinemas in May.

10. When can I see THE D TRAIN?
THE D TRAIN is released in Irish cinemas on September 18th 2015. Watch the trailer below…