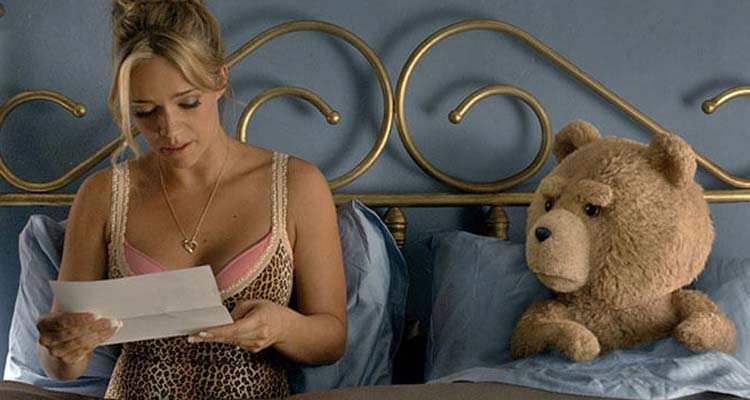 10 things you need to know about TED 2

TED 2 – the follow up to Seth MacFarlane’s hugely successful and hilarious movie about the move between a grown man and his magical talking teddy bear – is released in Irish cinemas this week. This time out, Ted (MacFarlane) has got married to the pretty but dim Tami-Lyn (Jessica Barth) and they want to have a baby. Of course, since Ted is not actually a human being, he has to prove his humanity in a court of law.

Here at Movies.ie, we are big fans of the first TED movie, and can’t wait to see what MacFarlane and Wahlberg get up to this time, so we have gathered 10 facts together about TED 2.

1. Makin’ that money!
TED was a critical and commercial success, becoming the twelfth-highest-grossing film of 2012, with a box office taking of $549 million worldwide. No wonder we are getting a sequel!

2. First time for everything
TED and TED 2 mark the first time Mark Wahlberg has appeared in the original movie and it’s sequel.

3. Not returning
Mila Kunis does not reprise her role as Lori, since she was pregnant with her first child at the time of filming.

4. Cameo
Morgan Freeman and Liam Neeson have cameos in TED 2. Stephen Collins, who played Eric Camden on the TV show 7th HEAVEN – also had a cameo in the movie. When allegations of child sexual abuse were levelled at the actor, his part was cut out of the film.

5. Family Guy!
There are several references to FAMILY GUY – MacFarlane’s long-running animated TV show – throughout TED 2, including a mishap with a shelf and a vial of donated sperm, a chicken fight and a rendition of the song ‘At this Moment’ by Billy and the Beaters. Morgan Freeman’s character is also named after one of the writers of FAMILY GUY, Patrick Meighan.

6. Curious Truth
There is a reference to 9/11 in TED 2; Both Mark Wahlberg and Seth MacFarlane were booked to fly on American Airlines Flight 11 that morning. Wahlberg changed his plans at the last minute and MacFarlane arrived at the airport too late to board.

7. Irish bear
In a recent interview with RTÉ Ten, Mark Wahlberg said that Ted is actually Irish; ‘He is absolutely 100% Irish. Ted is Boston-Irish Catholic or Boston-Irish Protestant, whatever you are comfortable with’.

8. Reunited
Amanda Seyfried stars in TED 2 as the female lead Samantha. This is the second time Seyfried has worked with Seth MacFarlane, after A MILLION WAYS TO DIE IN THE WEST, which was released in 2014.

9. Post Credits Scene
Not to give too much away, but stick around for a post credits scene, featuring Liam Neeson, after TED 2.