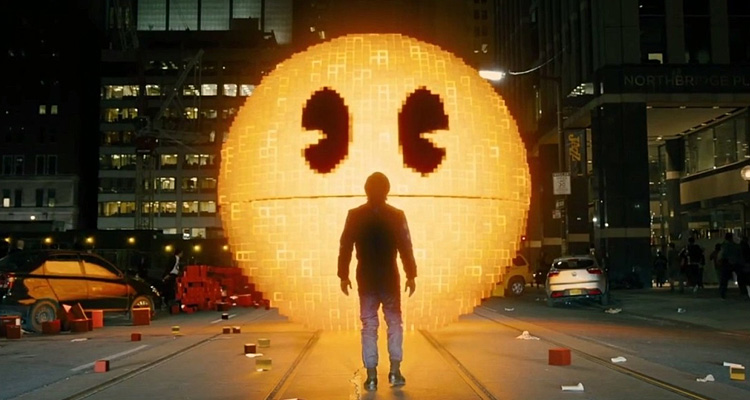 10 things you need to know about PIXELS

PIXELS, Adam Sandler’s latest blockbuster is released in Irish cinemas this week, and blends together beloved video games from our past – think Pac-Man, Donkey Kong and Space Invaders – in a story about aliens misinterpreting our classic arcade games as a declaration of war, and turning the characters against us. Movies.ie has gathered together the facts about PIXELS, keep reading to find out more…

1. Short Film
PIXELS was inspired by a short film of the same name by French director Patrick Jean. The short was Jean’s first, and went on to win the Annecy Crystal for Best Short Film at the 2011 Annecy International Animated Film Festival.
Watch the full short below…

2. Trailer
The first trailer for PIXELS was released on March 19, 2015 and received 34.3 million global views in 24 hours. This smashed the previous record held by a Sony trailer; THE AMAZING SPIDER-MAN 2, which racked up 22 million views in 2014.

3. High Score
Peter Dinklage plays Eddie Plant in PIXELS, a character modelled after Billy Mitchell; the first person to achieve a perfect Pac-Man score of 3,333,360 in 1999. Mitchell also held the world record in Donkey Kong and Donkey Kong Jr. Mitchell lost these titles in 2010 only to reclaim them, then lose them again.

4. Pakkuman
Pac-Man creator Toru Iwatani has a cameo in PIXELS, but not as himself; Iwatani plays the Electric Dream Factory Repairman. Denis Akiyama plays a fictionalised version of the iconic game creator – named Professor Iwatani – as the real Iwatani does not speak English.

5. Anachronism
Toward the end of the film, a character from the Paperboy game emerges from the ship in the final act of the film, that game did not come out until 1985, 3 years after the movie states the probe is sent into space. Oops!

7. Nixed
According to the Hindustan Times, The Central Board of Film Certification (CBFC) in India requested that a scene showing the famous tourist attraction The Taj Mahal being destroyed be removed from the version of the film shown in India. The scene has already been scrapped from the trailer in India.

8. Reunited
This is the ninth time that Kevin James and Adam Sandler have appeared together on screen. They previously appeared together in I NOW PRONOUNCE YOU CHUCK & LARRY, GROWN UPS and YOU DON’T MESS WITH THE ZOHAN… Among others.

9. Return to the Arcade
The musical score for the movie was composed by Henry Jackman, who also worked as composer for the Disney arcade game movie, WRECK-IT RALPH.

10. When can I see PIXELS?
PIXELS is released in Irish cinemas on August 12th 2015. Watch the trailer below…