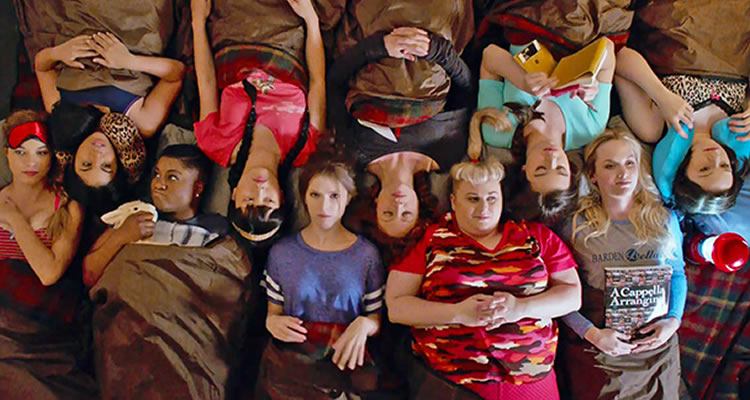 10 things you need to know about PITCH PERFECT 2

When it was released in 2012, PITCH PERFECT was something of a sleeper hit, making a true star out of the hilarious Rebel Wilson, and making us love Anna Kendrick a little more for her bad-girl-turned-good role. This week the film is finally released in Irish cinemas, and Movies.ie have gathered together 10 things about the film that you really ought to know…

1. Direction Change
Jason Moore, who directed the original PITCH PERFECT, is currently working on the Amy Poehler Tina Fey film SISTERS, so Elizabeth Banks has stepped into his role behind the camera. Banks has previously directed short films, and a segment of the almost-universally panned MOVIE 43, but this is her feature debut. We’re excited to see what she can do.

2. Lost in Translation
This time out, The Barden Bellas not only enter the world Acapella Championships, but they must face off with the European Champions – Das Sound Machine – to get back on top. This will surely lead to many slightly off-colour jokes, epic sings offs and a tendency for colloquial US slang to be slightly lost on the German team. They say a joke is not funny if you have to explain it, but we know from experience that the Bellas have an hilarious way with words.

3. The Songs
We already know that PITCH PERFECT 2 there will be tons of popular songs crammed into the film, including Uprising by Muse, Wrecking Ball by Miley Cyrus, Poison by Bel Biv Devoe and Run the World (Girls) by Queen Bey herself, Beyoncé.

4. Chemistry
From watching PITCH PERFECT, we know there is great chemistry between the cast, but the energy in the trailer between Elizabeth Banks and co-star John Michael Higgins is fantastic. Not only are the two in sync in terms of comic timing, but they both seem to be overplaying their characters just enough. Let’s hope there is a lot more of them together in the film.

5. Who run the world?
The Barden Bellas enter the World Championships in PITCH PERFECT 2, and there are a couple of hints in the trailer as to where they will travel. Keep your eyes peeled for shots of New Orleans and what looks rather like Copenhagen.

6. The Cast
As well as Anna Kendrick, Rebel Wilson and Brittany Snow, Hana Mae Lee is set to return for PITCH PERFECT 2. Fans of the original will recognise Lee as the softly spoken Lilly, who had a twisted and darker side; we expect lots of laughs from Lilly this time out. Joining Lee and her co-stars is SONS OF ANARCHY star Katey Sagal and TRUE GRIT’s Hailee Steinfeld.

7. Truth meets fiction
Famous acapella group, and winners of the third season of The Sing-Off, Pentatonix (also known as PTX) have a cameo appearance in the film. Aca-Amazing!

8. Cups… Again
Anna Kendrick’s breakout hit from the first film ‘Cups’, also features in PITCH PERFECT 2. This time the version used is a cover of the version recorded by The Lulus.

9. Cameo
Writer of PITCH PERFECT and PITCH PERFECT 2, Kay Cannon, has a cameo in the film as a news reporter. Keep your eyes peeled.