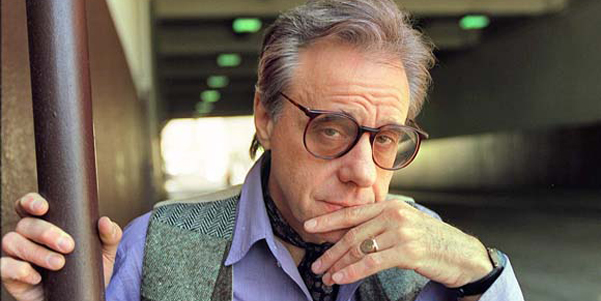 10 things you need to know about Peter Bogdanovich

SHE’S FUNNY THAT WAY is released in Irish cinemas this week, and is the first film from veteran director Peter Bogdanovich in 12 years; the last being THE CAT’S MEOW. Since he has been absent as a director for so long, Movies.ie gathered together some facts about the director…

1. Man of many talents
Although he is perhaps best known for directing the film THE LAST PICTURE SHOW, Bogdanovich is also a film historian, writer, actor, producer and critic. He worked as an actor in the 1950s, programmed movies at the Museum of Modern Art in New York City and built a reputation as a film critic in Esquire Magazine.

2. Friends
Over the course of his career, Bogdanovich made some incredibly famous and good friends; he befriended Orson Welles when he interviewed him, and later wrote a book on Welles; and he became friends with director John Ford, but the two later fell out. Bogdanovich believes that his falling out with legendary director John Ford was related to his guiding long-time Ford repertory member Ben Johnson to the Academy Award.

3. Just say no
Bogdanovich turned down offers to direct films that went on to become huge successes, including CHINATOWN, THE GODFATHER and A FISTFUL OF DYNAMITE. He turned down the latter because he was afraid of such a big production.

4. Three Hits
Bogdanovich is famous for having three massive directorial hits in a row; THE LAST PICTURE SHOW, WHAT’S UP DOC? and PAPER MOON. Sadly, his next three films – DAISY MILLER, AT LONG LAST LOVE and NICKELODEON – were all box office disasters that damaged his standing in the film community.

5. Direct to Success
Over the course of his career, Bogdanovich has directed 6 actors in Oscar-nominated performances: Ben Johnson, Cloris Leachman, Ellen Burstyn and Jeff Bridges for THE LAST PICTURE SHOW, Tatum O’Neal and Madeline Kahn for PAPER MOON. Johnson, Leachman and O’Neal won Oscars for their performances.

6. Apology
After AT LONG LAST LOVE was pulled from cinemas due to poor ticket sales in 1975, Bogdanovich wrote an open letter, printed in newspapers throughout the country, apologizing for the quality of the film.

7. Acting
If you think Bogdanovich looks familiar, that could be because he has had a long and varied career as an actor, but perhaps his most well known recent role is as Dr. Elliot Kupferberg on THE SOPRANOS. He also directed the 2004 episode of the show titled SENTIMENTAL EDUCATION.

8. True Story
Bogdanovich’s last film, THE CAT’S MEOW, was based around the true story of the death of silent film director, producer, screenwriter and actor Thomas H. Ince. Ince died in mysterious circumstances on board a yacht in 1924, and the story has since passed into Hollywood folklore. Bogdanovich first heard the tale from his friend Orson Welles.

9. Tragic
In 1980, Bogdanovich was in a relationship with former Playboy Playmate Dorothy Stratten – whom he had directed in THEY ALL LAUGHED – when she was murdered by her estranged husband.