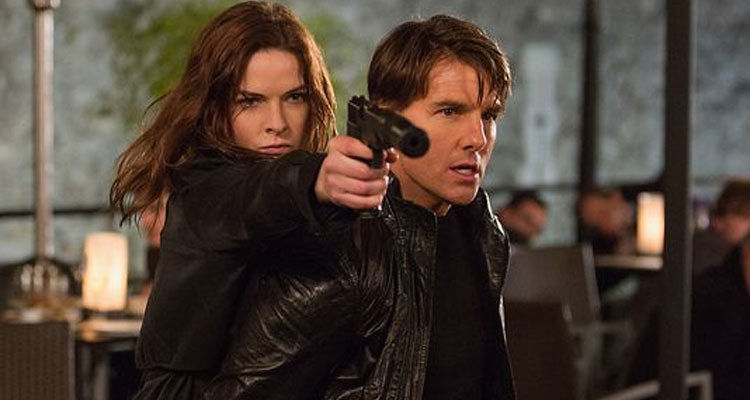 10 things you need to know about MISSION: IMPOSSIBLE – ROGUE NATION

The fifth instalment in the hugely successful MISSION: IMPOSSIBLE franchise hit Irish cinemas this week, with Tom Cruise reprising the role of IMF Agent Ethan Hunt. This time out Hunt, along with Benji (Simon Pegg), Brandt (Jeremy Renner) and Luther (Ving Rhames) are targeted by the mysterious Syndicate; an international rogue organisation determined to destroy the IMF.

Here at Movies.ie, we are big fans of the MISSION: IMPOSSIBLE films, so we have gathered together 10 facts about the upcoming movie that you simply need to know.

2. Return
The film’s producers originally wanted director Brad Bird to return for MISSION: IMPOSSIBLE – ROGUE NATION, but Bird declined the offer in order to direct TOMORROWLAND. Christopher McQuarrie was then suggested for the job by Tom Cruise.

3. Daredevil
Tom Cruise is well known for doing most of his own stunt work. As well as doing the stunt driving for MISSION: IMPOSSIBLE – ROGUE NATION, Cruise performed the sequence where Ethan Hunt climbs on the outside of a flying airplane without the use of special effects or a stunt double. At times he was suspended on the aircraft 5000 feet in the air (1.5 kilometres), and did the sequence several times!

4. Inspiration
Actress Rebecca Ferguson was so inspired by Tom Cruise doing his own stunt work that she decided to follow suit, and found herself jumping off the Vienna Opera House, holding her breath under water for six and a half minutes, and standing in the middle of a road while motorbikes speeded towards her!

6. Reunited
Tom Cruise and Alec Baldwin both star in MISSION: IMPOSSIBLE – ROGUE NATION. This is their second film together after the 2012 musical ROCK OF AGES.

7. Comfort is Key
Simon Pegg has a special chair that he uses on film sets – the zero gravity garden chair – after having been given one by Jeff Bridges. Pegg is so enamoured by these chairs that he bought one for both Tom Cruise and Rebecca Ferguson ‘…so they could be as comfortable as me. It’s a really lovely recliner; I sleep in it a lot when I’m on set. The chair is called Jeff after Jeff Bridges’.

8. Instant Chemistry
Director Christopher McQuarrie cast Rebecca Ferguson in the role of Ilsa, after watching her have a conversation with Tom Cruise. McQuarrie says ‘Rebecca walked into the room, and we were very short on time; Tom and Rebecca just started chatting and they continued talking and someone finally came up to me and asked if I wanted to do the audition because we were running out of time, and I said “She’s already got the job, she’s fine”.’

9. Fan
Rebecca Ferguson says she is a big fan of Tom Cruise and Emily Blunt’s EDGE OF TOMORROW, and was determined to be as strong and badass as Blunt, saying; ‘It’s not my favourite [of his, but] action wise; I think he has enormously good timing and energy, as does she. I love their energy. Once again, competitive; I am going “Yeah we’re gonna beat that, man!”.’