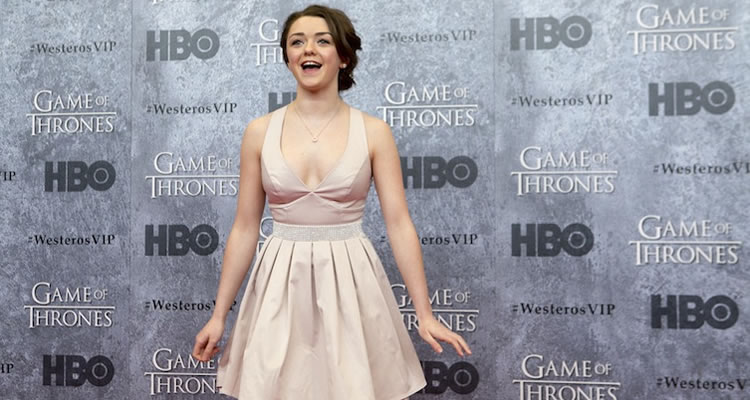 10 things you need to know about Maisie Williams

THE FALLING is released in Irish cinemas this week, and stars Maisie Williams as a young girl at the centre of a fainting epidemic at her school. We bring you the facts about the talented Williams…

1. Just Dance
Although we know and love her as an actress, Williams has stated that her first love is dancing. She does many different style of dance, including Ballet, Pointe, Tap, Street and Freestyle.

2. Doctor!
Williams will guest star in an upcoming episode of sci-fi classic TV show, DOCTOR WHO.

3. Fangirl
Although she has her own loyal following, Williams is also a bit of a fangirl, and has confessed her love for Ed Sheeran, Kate Nash, Coldplay and Skrillex.

4. Just a kid
Williams is now 18 years old, meaning she was just 14 when she started playing the beloved Arya Stark on GAME OF THRONES.

5. Winner!
Speaking of GAME OF THRONES, Williams has won numerous awards for her work on the show, including the BBC Radio 1 Teen Award for Best British Actor in 2013.

6. Laugh and the world laughs with you…
Although she is best known for her roles in dramatic films, Williams has proven she has a great sense of humour, appearing in a Funny or Die skit called ‘The Olympic Ticket Scalper’, and two episodes of ROBOT CHICKEN.

7. Shooting Star
In February of this year, Williams was named as a young talent to watch out for, when she was awarded the Shooting Stars Award at the 65th Berlin Film Festival.

8. Big Screen
As well as her work on GAME OF THRONES, Williams has been steadily building a movie career, by appearing in several indie flicks over the last while, including GOLD, HEATSTROKE and UP ON THE ROOF.

9. Coming Up
As well as returning for season 5 of GAME OF THRONES, Williams is working on THE DEVIL AND THE DEEP BLUE SEA with Jessica Biel and Jason Sudeikis.

10. When can I see THE FALLING?
THE FALLING is released in Irish cinemas on April 24th 2015. Watch the trailer below…