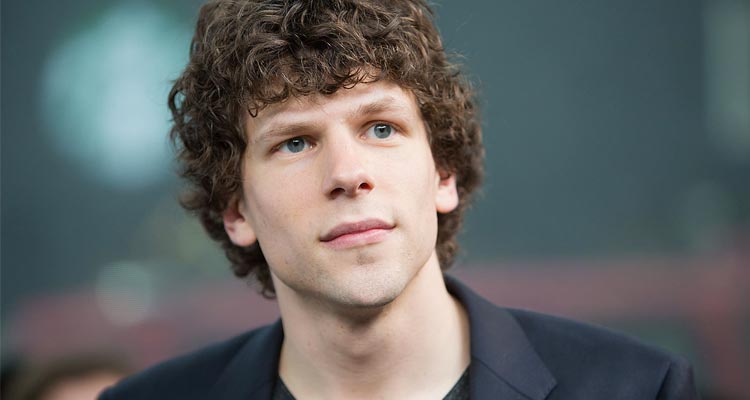 10 things you need to know about Jesse Eisenberg

Actor Jesse Eisenberg is having a great time in cinemas lately, between ‘Batman Vs Superman: Dawn of Justice’ dominating the box office, ‘Now You See Me 2’ and ‘Café Society’ on the way later this year, and his new film ‘Louder Than Bombs’ hitting Irish cinemas this week.

To celebrate the hard working actor, Movies.ie have gathered together 10 facts about Jesse Eisenberg you really ought to know.

1. Writer
Before he was famous, Eisenberg started writing screenplays at 16, including one about how Woody Allen came to change his name. Eisenberg managed to get the script to Woody Allen’s ‘people’, but instead of the seal of approval he was expecting, the aspiring actor was served with two cease and desist letters. It all turned out well in the end however, since Eisenberg starred in Allen’s film ‘To Rome with Love’ in 2012, and this year’s Cannes Film Festival opener ‘Café Society’.

2. Struggles
Eisenberg struggled with anxiety at school, but found solace with his first professional acting role in Arje Shaw’s off-Broadway play, ‘The Gathering’ when he was 16. In an interview with The Guardian, Eisenberg stated, “When playing a role, I would feel more comfortable, as you’re given a prescribed way of behaving”.

3. Breakthrough
In his breakthrough role in ‘Zombieland’, Eisenberg played a character who was afraid of clowns. Ironically, Eisenberg’s real life mother worked as a party clown.

5. Rolling!
Eisenberg and his younger sister Hallie played brother and sister in the 2010 film ‘Holy Rollers’.

6. OCD
Eisenberg has been diagnosed with Obsessive Compulsive Disorder and openly talks about his struggle with the disorder, saying in an interview with Digital Spy; “I touch the tips of my fingers in a weird way; I don’t step on cracks”.

7. Education
In the film ‘Zombieland’, Eisenberg’s character has a line about updating his Facebook status, in reality, Eisenberg had no idea what the popular social networking site was, and had to ask a crew member to clarify the line. Less than a year later, the film ‘The Social Network’ was released, in which Eisenberg plays Facebook founder Mark Zuckerberg.

8. Oscar
Eisenberg was Oscar nominated for his role as Mark Zuckerberg in the film ‘The Social Network’, in an interview he said that one of the hardest things about the role was having to deliberately speak and behave in a manner he had struggled against in his own personality his entire life.

9. Cat Lover
Jesse Eisenberg said in an interview on Conan that he spends a lot of his time fostering cats until they find their forever homes. Eisenberg is also a vegetarian.