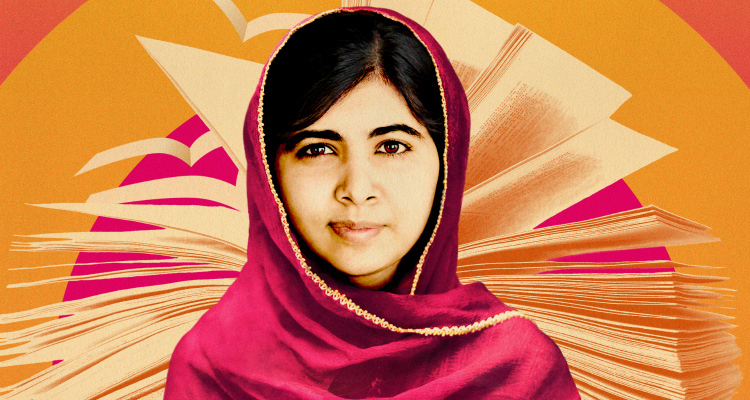 10 things you need to know about He Named Me Malala

‘He Named Me Malala’ is released in Irish cinemas this week. This new documentary about Nobel Peace Prize winning Malala Yousafzai who, at the age of 15, was shot in the head for speaking out about the lack of education for girls in her native Pakistan. Malala survived, and for the first time director Davis Guggenheim tells her story on the big screen.

Malala Yousafzai is a fascinating subject for a documentary, so we have gathered together some facts about Malala and the film, that we feel you really ought to know.

1. Who is ‘He’?
The ‘He’ of the film’s title – ‘He Named Me Malala’ – refers to Malala’s father who named her after the to the Afghani folk hero Malalai of Maiwand. Malalai is said to have been an 18-year-old girl who rallied local Pashtun fighters against the British troops at the 1880 Battle of Maiwand.

2. Forthright
In October 2012, Malala – then aged 15 – was shot in the head and shoulder by a Taliban gunman as she rode a bus home from school. Inbelievably, Malala survived, and was brought to the UK for medical treatment and rehabilitation.

3. Why Malala?
Malala was targeted by the Taliban for being outspoken about the need for Pakistani girls to be educated as well as boys. Malala wrote a blog about her life under the Taliban for the BBC Urdu website, which lasted from January until March 2009. After this, Malala took part in several interviews and was awarded Pakistan’s first National Youth Peace Prize in 2011. After this, she began to receive death threats in newspapers, on her Facebook page and at her home.

4. Not the first
‘He Named Me Malala’ is not the first film to be made about the outspoken teenager, in 2010 journalist Adam B. Ellick made a New York Times documentary about Malala’s life as the Pakistani military intervened against the Taliban control of the Swat Valley, where Malala is from.

5. Survivor
After the shooting, Malala continued to fight for education rights, while doing her GCSEs in England.

6. Malala Day
On 12 July 2013 the UN hosted an event they named “Malala Day”; the activist’s first public speech since she was attacked. The day was Yousafzai’s 16th birthday, and she spoke at the UN to call for worldwide access to education.

7. Zeitgeist
Malala has been called the world’s most famous teenager. While this is a topic up for debate, a character clearly inspired by her features in the Netflix show ‘BoJack Horseman’. She is referred to as ‘That Pakistani girl who keeps winning Nobel Prizes.’

8. Youngest ever
In 2014, Malala Yousafzai was jointly awarded the Nobel Peace Prize with Indian child rights activist Kailash Satyarthi. At the age of 17, Malala became the youngest person to ever win a Nobel Prize.

9. Book
Yousafzai’s memoir ‘I Am Malala: The Story of the Girl Who Stood Up for Education and was Shot by the Taliban’, co-written with British journalist Christina Lamb, was published in October 2013. The book received reviews comparing it to ‘The Diary of Anne Frank’, but has been banned by The All Pakistan Private Schools Federation.