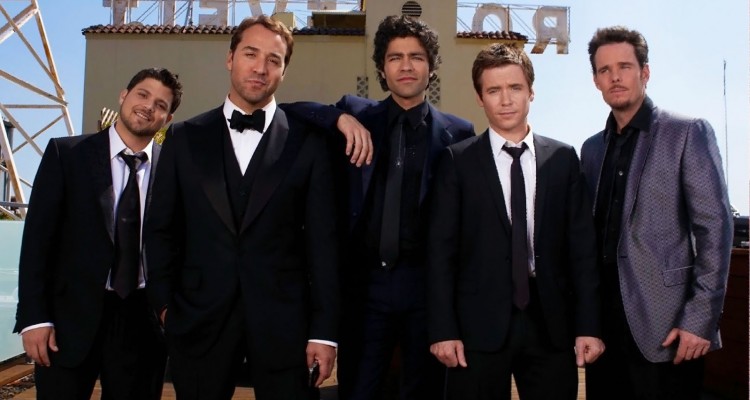 10 things you need to know about ENTOURAGE

ENTOURAGE ran on HBO from 2004 – 2011, and told the exploits of Vincent Chase (Adrian Grenier), a Hollywood actor, and his ‘entourage’ as they tried to find love and success in the labyrinth of Hollywood.
This week, the ENTOURAGE boys are back for their first big screen outing, and Movies.ie gathered together some facts about the movie that fans have been demanding since the show ended.

1. Delays
The film hit several delays along the way, including contract issues with the film’s cast, which promted creator Doug Ellin to say that the film was ‘less and less likely every day’. As well as this, Kevin Connolly broke his leg during filming, which led to further delays.

2. Art imitating Life
Mark Wahlberg – who has a small role as himself in the film – is also executive producer, and states that the film is loosely based on his own life.

3. Character inspirations
Wahlberg has also said that Kevin Connolly’s character Eric is based on his friend and executive producer Eric Weinstein, while Turtle (Jerry Ferrara) is based on Wahlberg’s former ‘gofer’ Donnie Carroll aka ‘Donkey’, who unsuccessfully auditioned for the show, and sadly died after an asthma attack in 2005.

4. Famous fan
While the final season of the TV show was being aired in 2011, President Barack Obama stated in an interview that ENTOURAGE was his favourite show. Let’s hope he likes the film as much!

5. Pick Up
The film takes place immediately where the series left off with Ari (Jeremy Piven) and his wife in Italy.

6. Cameos
As with the TV show, ENTOURAGE is littered with cameos from famous faces, including Jessica Alba, Liam Neeson, Pharrell Williams and Jon Favreau.

7. Reunited
The film reunites Adrian Grenier and Haley Joel Osment 14 years after A.I. ARTIFICIAL INTELLIGENCE; Osment and Grenier had one scene together in the film.

8. Guess Who’s Back?
Mark Wahlberg and Kevin Dillon have both mentioned a sequel to ENTOURAGE is likely, if the film is well received. Doug Ellin has also said he would love to make a trilogy of ENTOURAGE films. It’s up to you now, fans!

9. …Back Again?
The movie had an advance screening on a Tuesday in the US, which grossed $2 million in ticket sales. According to Fandango, 50% of movie ticket sales on that day were for ENTOURAGE. That sequel is looking more and more likely!

10. When can I see ENTOURAGE?
ENTOURAGE is released in Irish cinemas on June 19th 2015. Watch the trailer below…