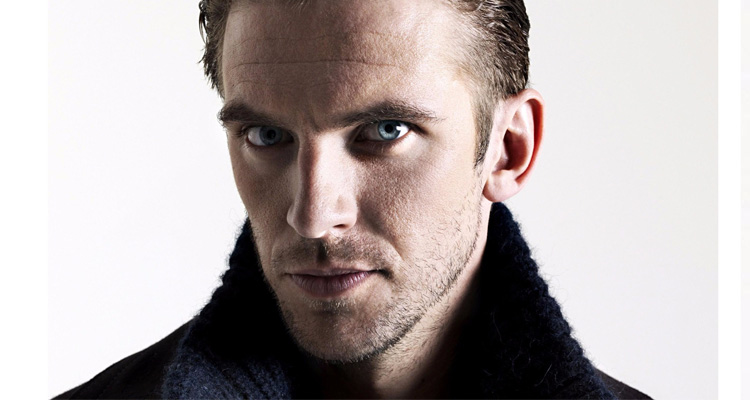 10 things you need to know about Dan Stevens

THE GUEST is released in Irish cinemas this week, and stars Dan Stevens as David; a soldier returned from war, who befriends the family of his friend who died in action. All is not as it seems, however, and when people turn up dead, the finger of suspicion quickly points at David.
Dan Stevens has at least three films due out before the end of the year, so we took the opportunity to find out more about the star of THE GUEST…

1. Sorry. So Sorry.
When his character, Matthew Crawley, was killed off in a DOWNTON ABBEY Christmas Special two years ago, Stevens found himself in the odd position of having to apologise to fans. He said, “I think what emerged is that it’s an unwritten rule that you’re not supposed to die on British television on Christmas Day”

2. The Bookish Type
In 2011 Dan contributed articles and reviews for the Daily Telegraph and The Times, whilst also becoming editor at large for The Junket magazine. After appearances on television as a host on BBC’s Have I Got News For You and as a critic on BBC’s Review Show programme, it was announced that Dan would be a judge for the 2012 Man Booker Prize, which led to the actor having to read 147 books!

3. Escape From Escape From New York
Although the rumour mill has kicked into overdrive recently, naming Stevens as a frontrunner for the role of Snake Plissken in the remake of John Carpenter’s ESCAPE FROM NEW YORK, he has said this is simply rumour, although he would be up for the job if offered. Someone make this happen!

4. Love and Marriage
Stevens is married to South African singer Susie Hariet, and they have two children together.

5. College Life
While at Cambridge he was a member of the Footlights and the Marlowe Society. He was first spotted by director Sir Peter Hall at a Marlowe Society production of MACBETH in which he played the title character alongside Hall’s daughter, Rebecca, who played Lady Macbeth. Hall and Stevens remain good friends.

6. Early Days
Before he was cast in DOWNTON ABBEY, Stevens played Edward Ferrars in the BBCs 2008 adaptation of SENSE & SENSIBILITY. Dominic Cooper also starred in the series; Stevens and Cooper worked together again in 2013 on the film SUMMER IN FEBRUARY.

7. Childhood
Stevens was adopted at birth, and has a younger brother who was also adopted. Stevens has said he has never tried to find his birth parents.

8. Rebel Rebel
Although he is known – at the moment – for playing well behaved, gentrified characters, life does not always imitate art. Stevens was a bit of a hellraiser as a kid, he said “Not a lot of people would think that I spent most of my early years totally rebelling against anything I could, getting suspended from school, going on demonstrations. I was a pretty difficult teenager”.

9. Velvet Voice
Stevens indeed has a delicious accent, and he has Stevens has narrated over 25 audiobooks, including THE ANGEL’S GAME, WOLF HALL and WAR HORSE. Earlier this year, he was nominated for two Audie Awards, in the Classic category and Solo Narration (Male) category for FRANKENSTEIN.

10. Coming Up
As well as THE GUEST, Stevens is soon to be seen in A WALK AMONG THE TOMBSTONES with Liam Neeson, and will play Sir Lancelot in NIGHT AT THE MUSEUM: SECRET OF THE TOMB.

THE GUEST is released in Irish cinemas on September 5th 2014