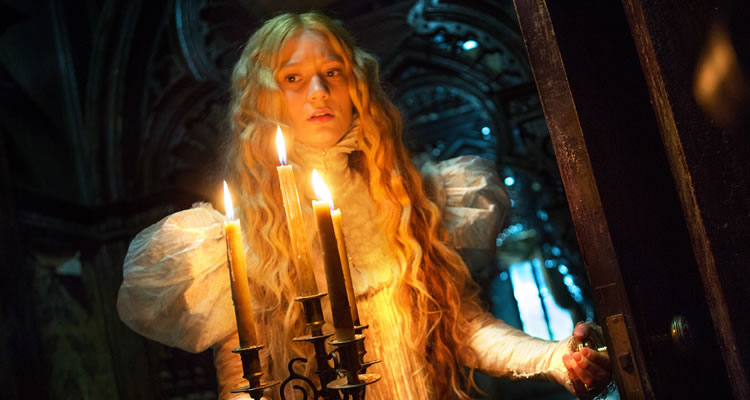 10 things you need to know about Crimson Peak

Guillermo del Toro brings his special brand of gothic horror back to Irish cinemas this week, with the release of ‘Crimson Peak’. Starring Tom Hiddleston, Mia Wasikowska and Jessica Chastain, the film is set in a crumbling northern English mansion in the late 19th century. Edith (Wasikowska) is a young author who has seen ghosts all her life, and whose new husband Thomas (Hiddleston) is charming and welcomes his bride into his home. It is not long, however, before Edith realises the home harbours some ghostly, ghastly mysteries; mysteries that Thomas and his sister are desperately trying to hide.

Movies.ie have gathered together 10 facts about ‘Crimson Peak’ that you should know before you go to see the film this weekend.

1. In the pipeline
Director Guillermo del Toro and Matthew Robbins wrote the script for ‘Crimson Peak’ after the release of ‘Pan’s Labyrinth’ in 2006. The film was put on hold several times for Del Toro to work on other projects – ‘Hellboy II: The Golden Army’ and ‘The Hobbit’ films – but although it was suggested that Del Toro step aside, he could not find another director he wanted to hand the project to, so he held on until the time was right.

2. Throwback
In an interview with Total Film, del Toro said of ‘Crimson Peak’; “I think people are getting used to horror subjects done as found footage or B-value budgets. I wanted this to feel like a throwback.”

3. Casting
Benedict Cumberbatch was originally cast as Sir Thomas Sharpe, but was replaced by Tom Hiddleston. Since the two actors are friends, Hiddleston asked for Cumberbatch’s blessing before he accepted the role, a blessing that he obviously got!

4. Competition
Charlie Hunnam and Tom Hiddleston both auditioned for the role of Thor in the Marvel Cinematic Universe. Neither got the part, but Hiddleston memorably plays Loki in the Marvel movies.

5. Cover Version
The trailer for the film features the P.J. Harvey cover of Nick Cave’s song ‘Red Right Hand’. The same song, although recorded by a different artist, was used in an important scene in ‘Hellboy’. Perhaps this is del Toro’s favourite song!?

8. Home Sweet Home
The house used in the film was built in its entirety for the shoot. Fans can’t go and visit it however; it was torn down after filming finished in order to make room on the set.

9. Rewrite
Emma Stone was also originally cast in the movie, alongside Benedict Cumberbatch. Whenboth actors left the project, del Toro did rewrites for the incoming actors Tom Hiddleston and Mia Wasikowska. This is an addition to the 11 or 12 drafts he wrote of the film as a whole. Phew!