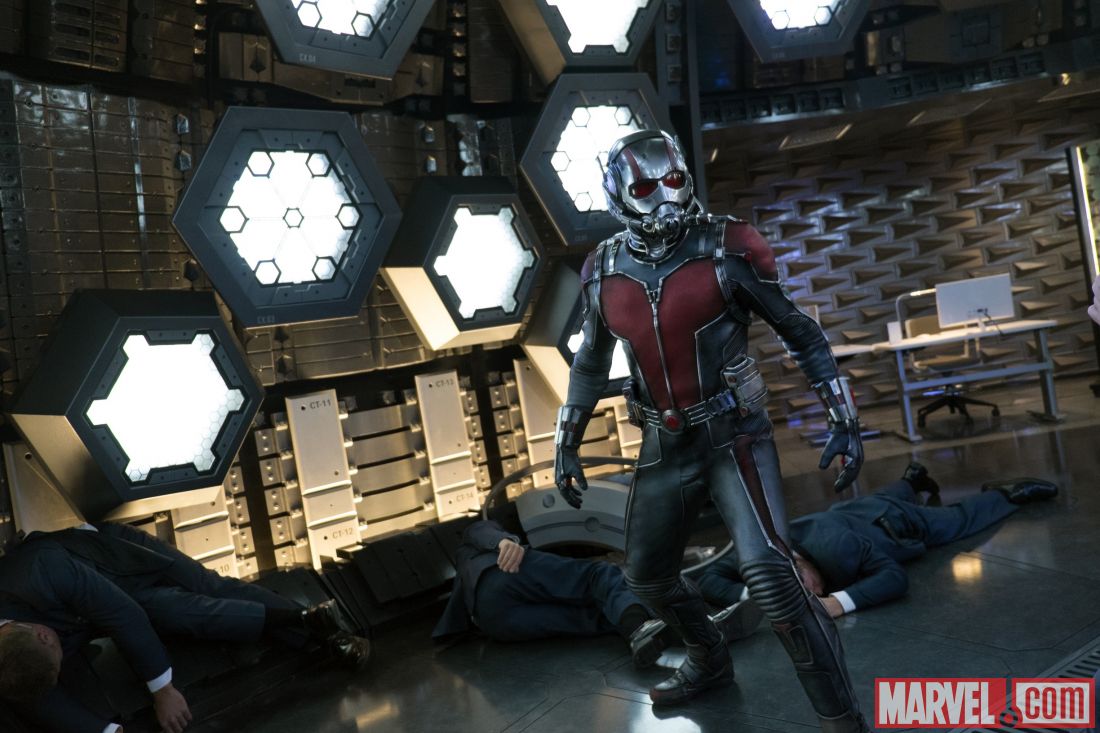 10 things you need to know about ANT-MAN

The long-awaited ANT-MAN is finally released in Irish cinemas this week. Based on the Marvel comics of the same name, and fitting into the Marvel Cinematic Universe – which is already home to the Avengers and the Guardians of the Galaxy – Ant-Man is a fun and action packed cinematic treat, with Paul Rudd taking on the title role of the reluctant super-hero.
Movies.ie gathered together some facts about the film, and its universe, so you can truly get excited to see this miniscule hero on the big screen.

1. First timer
Paul Rudd’s breakout roles were in the 90s films CLUELESS and ROMEO + JULIET. ANT-MAN marks the first time the actor has played a superhero on the big screen, unless you count Brian Fantana from the ANCHORMAN movies… And we sort of do!

2. The Wright Stuff
Frequent collaborator with Simon Pegg and Nick Frost, Edgar Wright, was originally on board to direct ANT-MAN, having pitched the idea to Marvel in 2003. Wright’s script was written and the film was about to begin shooting when the director unexpectedly left the project in 2014. He was replaced by Peyton Reed, who had been on the list to direct GUARDIANS OF THE GALAXY before James Gunn stepped in.

3. Re-writes
After Edgar Wright left the project, Paul Rudd and ANCHORMAN director Adam McKay rewrote some of the script for ANT-MAN. Wright, along with co-writer Je Cornish, still receives writing credits on the film.

4. Parks and Recreation
Paul Rudd is the second cast member from TV’s PARKS AND RECRE to be cast as a main lead in the Marvel Cinematic Universe, after Chris Pratt as Star-Lord in GUARDIANS OF THE GALAXY. Rudd played City Council hopeful Bobby Newport on the show, while Chris Pratt played the hilarious and childlike Andy Dwyer.

5. Age of Ultron
In the comics, Hank Pym – played in ANT-MAN by Michael Douglas – created Ultron, the main antagonist in the second Avengers movie. Of course, Joss Whedon changed this origin to have Ultron created by Tony Stark, and there is no mention of this in ANT-MAN, with Hank Pym solely focused on Scott Lang, so as not to load too much into one movie.

6. Avengers
In the comics, Ant-Man is one of the original Avengers, and even helps to find Captain America after he is lost after his encounter with Red Skull. Ant-Man did not appear in the Marvel movies until now however, since Edgar Wright asked that the studio not use Ant-Man or Wasp in their movies until ANT-MAN was made.

7. Cameos
Both John Slattery and Hayley Atwell have cameos at the beginning of the film, which further tie it into the Marvel Cinematic Universe. Slattery plays the older version of Howard Stark, Tony Stark’s father, and Atwell reprises her role as Agent Peggy Carter.

8. Suit Up!
According to Michael Douglas, Paul Rudd’s costume had to be altered because Rudd had gone on an extensive training and workout regimen in order to build the proper muscle size for a superhero. Rudd became so muscular, the costume had to be softened up.

9. Coming Up
Ant-Man is due to spend more time in Marvel movies now, with his role in CAPTAIN AMERICA: CIVIL WAR confirmed. It is not clear how much he will have to do with the Captain America movie as yet, but there is a heck of a lot teased in the second of the two credits sequences.

And watch the trailer below.