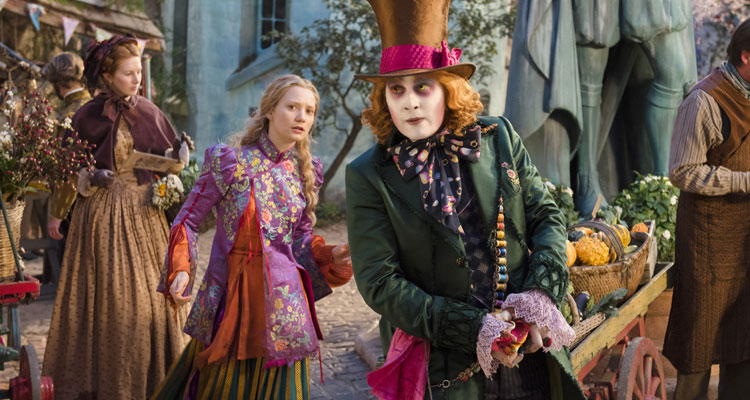 ‘Alice Through the Looking Glass’ is released in Irish cinemas this week. The sequel to Tim Burton’s 2010 film ‘Alice in Wonderland’ sees Alice (Mia Wasikowska) return to Wonderland after her adventures are not believed by the people in the real world. This time, Alice must take on Time (Sacha Baron Cohen) itself to save her friend the Mad Hatter (Johnny Depp).
To celebrate the release of ‘Alice Through the Looking Glass’, Movies.ie have gathered together 10 facts about the film you really need to know.

1. New Direction
Although Tim Burton directed ‘Alice in Wonderland’, he is not returning to the director’s chair this time out. Instead, James Bobin – who rebooted ‘The Muppets’ for the big screen – has taken over, and Burton serves as a producer.

2. Tempus Fugit
Although there has been a six year gap between the film versions of ‘Alice in Wonderland’ and ‘Alice Through the Looking Glass’, author Lewis Carroll took the exact same amount of time between the books; ‘Alice’s Adventures in Wonderland’ was published in 1865, and ‘Through the Looking-Glass, and What Alice Found There’ was published in 1871.

3. Sad Farewell
Alan Rickman reprises his role as the voice of the Blue Caterpillar in ‘Alice Through the Looking Glass’. This is Rickman’s finale role; he died in January this year, just four months before the film’s release.

4. From the Chrysalis
This time out, Alan Rickman’s Blue Caterpillar has gone through a transformation; he is now a butterfly, but hopefully just as dry and witty as he was in the first film.

6. Newcomers
New additions to the ‘Alice’ cast include Rhys Ifans – who is slated to play the Mad Hatter’s father, Zanik Hightopp – and Sacha Baron Cohen, who is playing an anthropomorphic version of Time; the villain of the film.

7. Ships in the Night
According to the BBC, filming for ‘Alice Through the Looking Glass’ took place in Gloucester Docks which included the use of at least four historic ships: Kathleen and May, Irene, Excelsior and the Earl of Pembroke, which was renamed The Wonder for the film.

8. Seventh Time Together
Alan Rickman and Helena Bonham Carter – who plays the Red Queen – have worked together on six films before ‘Alice Through the Looking Glass’, including ‘Alice in Wonderland’, ‘Sweeney Todd: The Demon Barber of Fleet Street’ and the ‘Harry Potter’ films.

9. Switcheroo
Michael Sheen was originally cast in ‘Alice in Wonderland’ as the Cheshire Cat, but ended up taking the role of the White Rabbit. Stephen Fry voiced the Cheshire Cat, and both actors reprise their roles in this sequel.