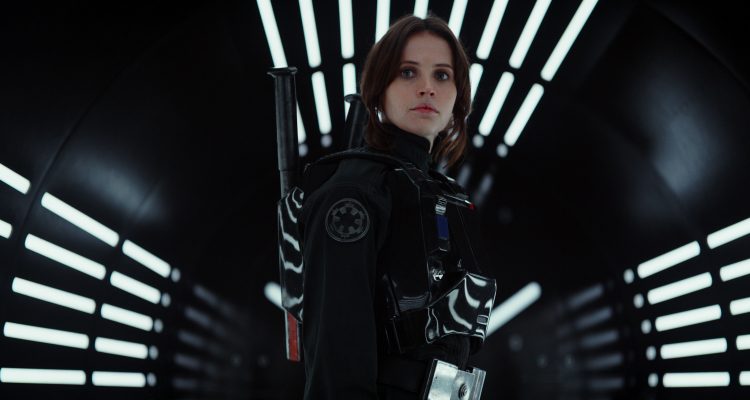 10 things you need to know about ROGUE ONE

Unless you have not been paying attention to movies recently, you will know that the ‘Star Wars’ spin off ‘Rogue One’ is released in Irish cinemas this week. The film, which is set between ‘Revenge of the Sith’ and ‘A New Hope’, follows the Rebellion as they strategise to steal the plans to the Death Star; a terrifying new weapon that the Galactic Empire is working on.

Here at Movies.ie, we are huge ‘Star Wars’ fans, and are very excited about this new instalment in the franchise, so to get you in the mood for ‘Rogue One’, we have gathered together 10 facts about the film that you really ought to know.

1. More to Come
‘Rogue One’ is planned to be the first in what has come to be known as the ‘Star Wars Anthology’ series with other films in the series expected to focus on Han Solo and Boba Fett.

2. First time for Everything
‘Rogue One’ is the first film in the ‘Star Wars’ franchise, released in cinemas, not to be scored by John Williams. Michael Giacchino is taking over musical duties on ‘Rogue One’, whose previous films include ‘Star Trek Beyond’, ‘Doctor Strange’ and ‘Jurassic World’.

4. Jyn Erso
Felicity Jones plays a new character to the ‘Star Wars’ universe; Jyn Erso. Erso is the daughter of Galen Erso (Mads Mikkelsen), a man who has been taken hostage by the Galactic Empire. Jones beat Tatiana Maslany, Kate Mara and her sister Rooney Mara to get the role.

5. This is the droid you’re looking for
As well as the cast listed above, Alan Tudyk also appears in ‘Rogue One’. Tudyk plays the droid K-2SO through motion capture. Tudyk previously played the robot character Sonny in ‘I, Robot’.

6. Consideration
Joel Edgerton was considered for a role in this movie. Edgerton previously appeared as Owen Lars in ‘Star Wars’ Episodes II and III. However, the character could very well appear within this new story, but it seems that his appearing in ‘Rogue One’ is just a rumour.

7. Obi-None
This is the first Star Wars movie to not feature Obi-Wan Kenobi in any form. Ewan McGregor recorded one line of dialogue for ‘Star Wars: Episode VII – The Force Awakens’, which was mixed with Alec Guinness’s voice for the Force sequence.

8. Debut
Lucas Film has brought in two new writers, fresh to the ‘Star Wars’ universe, to write ‘Rogue One’. Tony Gilroy wrote the first four Bourne films and was Oscar nominated for his screenplay for ‘Michael Clayton’, while Chris Weitz wrote the screenplays for both ‘About a Boy’ and last year’s ‘Cinderella’.

9. No Sequel
In recent interviews, both director Gareth Edwards and producer Kathleen Kennedy have confirmed that there will not be a ‘Rogue Two’, which makes sense, since we already have that sequel… It came out in 1977 and is called ‘Star Wars: A New Hope’.