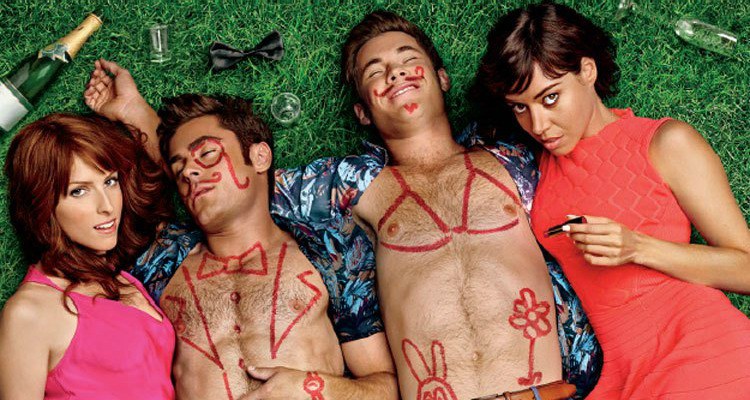 This week, ‘Mike and Dave Need Wedding Dates’ is released in Irish cinemas. The film follows brothers Mike (Adam Devine) and Dave (Zac Efron) whose parents tell them they have to find dates to their sister’s wedding, in the hope that company will calm them down and stop them wrecking the party. After they see Mike and Dave’s public campaign, Alice (Anna Kendrick) and Tatiana (Aubrey Plaza) decide to pose as the perfect girls to get a free trip to Hawaii for the wedding. The trouble is that these girls are even wilder than the guys.

To celebrate the release of ‘Mike and Dave Need Wedding Dates’, Movies.ie have gathered together 10 facts about the movie that you really ought to know.

1. True Story
‘Mike and Dave Need Wedding Dates’ is inspired by the true story of Mike and Dave Stangle who placed an ad on Craigslist seeking dates for their cousins wedding in October 2013. The ad went viral, landing the brothers a book deal and a movie deal. Obviously!!

3. Kutcher… You’re Out
The Stangles were prepared for their fame, even going so far as to state in their ad “We refuse … to let Ashton Kutcher play either of our characters, however, we will consider him for a supporting role”. Funnily enough, Ashton Kutcher does not appear in the film.

4. Reunited
‘Mike and Dave Need Wedding Dates’ is the third movie that Aubrey Plaza and Anna Kendrick have starred in together. The others are ‘Scott Pilgrim Vs The World’ and ‘Life After Beth’. The pair are best friends in real life.

5. Self Fulfilling Prophecy
In a 2014 skit filmed as a promotion for the film ‘Bad Neighbours’, Zac Efron tols Adam Devine that they could be brothers. In this film, they play siblings.

6. 50 First Dates
The wedding ceremony scene was filmed in front of the Hukilau Café, which also appeared in the 2004 Drew Barrymore and Adam Sandler movie ‘50 First Dates’. Fans will be disappointed though, Hukilau but is not an actual café in real life.

7. Cameos
The real Mike and Dave appear in the film as extras, as does Adam Devine’s real life girlfriend Chloe Bridges. All the parts are small, and Bridges pokes fun at her boyfriend by stating that she would chose Zac Efron’s character over his.

8. Prank
Sugar Lyn Beard plays Maike and Dave’s sister Jeanie in the film, and she decided to play a prank on members of the public while filming. Beard’s character sustains an injury in the film, and Beard decided to walk through a hotel with her make up still on. The joke backfired however, as people tried to call a doctor for the actress, and Beard was admonished for her joke by a studio executive working on the film.

9. High Response Rate
In real life, Mike and Dave received about 6,000 responses to their Craigslist ad. In the end, they took two girls they had known for years as their dates. Aww.