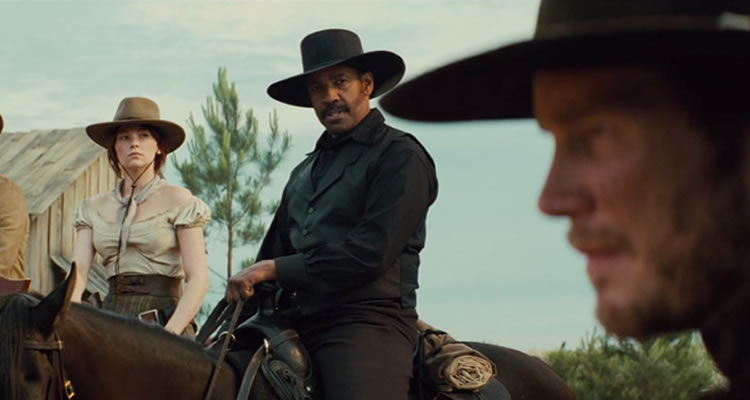 10 things you need to know about ‘The Magnificent Seven’

This week, ‘The Magnificent Seven’ is released in Irish cinemas. Boasting a stellar cast including Denzel Washington, Chris Pratt, Ethan Hawke, Haley Bennett and Peter Sarsgaard, this Western follows seven gunmen in the 1870s who team up to help the town of Rose Krick, which is put under siege by Bartholomew Bogue (Sarsgaard).

To celebrate the release of ‘The Magnificent Seven’, Movies.ie has gathered together 10 facts about the film that you really ought to know.

2. Music
Composer James Horner and director Antoine Fuqua became friends when working on last year’s ‘Southpaw’, and Horner had been working on the score for ‘The Magnificent Seven’ at the time of his accidental death last year. According to Fuqua, Horner’s team delivered the almost completed score to the set in Baton Rouge; Horner had composed the score while the film was still in pre-production. Producer and friend of Horner’s, Simon Franglen, ended up finishing the score.

3. Way way back
This new version of ‘The Magnificent Seven’ was in development as long ago as 2012. At that time, Tom Cruise was in talks to star.

4. Reunited
‘The Magnificent Seven’ reunites Denzel Washington, Ethan Hawke and director Antoine Fuqua for the first time since they worked on the critically acclaimed, and Oscar winning film ‘Training Day’.

5. Out
Jason Momoa was originally involved with ‘The Magnificent Seven’, but had to drop out due to scheduling conflicts with his upcoming film ‘Aquaman’.

6. Connected
As well as both starring in ‘The Magnificent Seven’ and in last year’s ‘Jurassic World’, both Vincent D’Onofrio and Chris Pratt have starred in stories told in the Marvel Cinematic Universe; Pratt in ‘Guardians of the Galaxy’ and D’Onofrio in ‘Daredevil’.

8. Casting
The cast of ‘The Magnificent Seven’ includes women, Asian and African-American actors – unlike the 1960 film – a choice that Fuqua made to reflect historical reality rather than a conscious attempt to update the story.

9. Banned
Interestingly, as someone who has carved out such an illustrious career in film, not only did Denzel Washington not watch Western films growing up, but he and his siblings were banned from going to the cinema since their father was a church Minister.