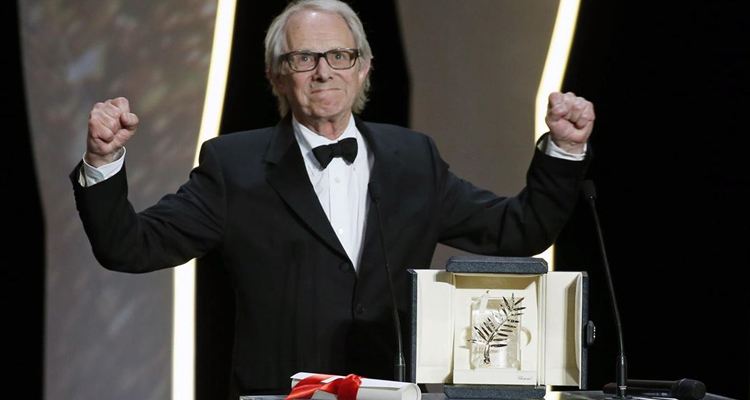 10 things you need to know about Ken Loach

Ken Loach’s latest film ‘I, Daniel Blake’ is released in Irish cinemas this week. Set in Newcastle, ‘I, Daniel Blake’ follows two people – single mother Katie (Hayley Squires) and Daniel (Dave Johns), a man who worked all his life until he fell ill – as they try to navigate the benefits system and survive.

To celebrate the release of ‘I, Daniel Blake’ in Irish cinemas, Movies.ie has gathered together 10 facts about director Ken Loach that you really need to know.

1. Not the end
After his 29th film ‘Jimmy’s Hall’, Ken Loach hinted that he would retire from narrative filmmaking. Obviously this was not true, since ‘I, Daniel Blake’ premiered at Cannes earlier this year. When we talked to screenwriter Paul Laverty, he said he had his suspicions as to whether Loach would actually retire, saying “I think he just felt tired after ‘Jimmy’s Hall’”.

2. Record Holder
Speaking of Cannes, Ken Loach’s appearance at Cannes this year was a record breaker; he is the only filmmaker to have presented 13 films at the festival, which include ‘The Angel’s Share’, ‘The Wind That Shakes the Barley’ and Black Jack’.

3. Winner Winner
Ken Loach has also won the coveted Palme d’Or at the Cannes Film Festival twice throughout his career, for ‘The Wind That Shakes the Barley’ in 2006 and this year’s ‘I, Daniel Blake’. This makes Loach one of only nine filmmakers who have won the award twice. Others include Francis Ford Coppola and Michael Haneke.

4. Thanks, but no thanks
Ken Loach is known for his films that comment on the realism of British life and are socially critical, and since he wanted to “remain outside the system”, he declined the OBE for Services to Film in 1977.

5. Read it and weep
Ken Loach is known for not giving his actors the full script for his films before shooting starts. Instead, the cast receive pages just days before they shoot a scene.

6. Bail
Ken Loach was a supporter of WikiLeaks founder Julian Assange, and even paid part of the $150,000 he needed to make bail in 2010.

7. Shelved
Some of Loach’s films have been shelved for political reasons throughout his career, including a 1971 documentary commissioned by the Save the Children charity, titled “The Save the Children Fund Film”, which was only screened for the first time in 2011. In an interview with The Guardian, the filmmaker said: “It makes you angry, not on your own behalf, but on behalf of the people whose voices weren’t allowed to be heard. When you had trade unions, ordinary people, rank and file, never been on television, never been interviewed, and they’re not allowed to be heard, that’s scandalous. And you see it over and over again”.

8. Accents
Loach is known for using traditional and strong dialects in his films, such as in ‘Kes’. When asked about this in an interview with Cineaste, Loach said “If you ask people to speak differently, you lose more than the voice. Everything about them changes. If I asked you not to speak with an American accent, your whole personality would change. That’s how you are”.

9. Curse it Out
Ken Loach was one of the first British directors to use swearing and blue language in his films. ‘The Big Flame’ is considered to be the first time the word “s**t” was uttered on the BBC, and ‘Sweet Sixteen’ was given a strict certificate due to the amount of profanity used in the film. This caused Loach to encourage under-18s to break the law to see the film.

10. When can I see ‘I, Daniel Blake’?
‘I, Daniel Blake’ is released in Irish cinemas on October 21st 2016. Keep an eye on Movies.ie for interviews with screenwriter Paul Laverty, and actors Dave Johns and Hayley Squires. Watch the trailer below…