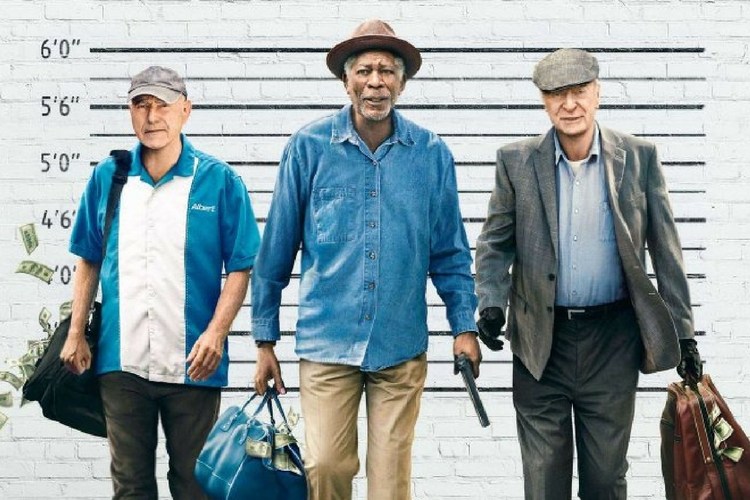 10 things you need to know about ‘Going in Style’

Zach Braff’s latest film ‘Going in Style’ is released in Irish cinemas, the film follows three elderly men – Willie (Morgan Freeman), Joe (Michael Caine) and Albert (Alan Arkin) – whose lives are turned upside down when their pension funds are liquidated, and Joe’s mortgage payment trebles. After he witnesses a bank robbery, Joe decides to follow suit, and plan a heist of the very bank that is dissolving their pensions.

To celebrate the release of ‘Going in Style’ in Irish cinemas, Movies.ie has gathered together 10 facts about the film that you really ought to know. Keep reading to find out more…

1. Remake
‘Going in Style’ is a remake of a 1979 film of the same name, which starred George Burns, Art Carney and Lee Strasberg in the leading roles. This time out, Michael Caine, Morgan Freeman and Alan Arkin are taking the leads in this comedic crime caper.

3. Young and Talented
Eighteen year old Joey King plays Michael Caine’s granddaughter Brooklyn in ‘Going in Style’. King and director Zach braff have worked together twice in the past; King played Grace, the daughter of Braff’s character, in ‘Wish I was Here’, and the two both had roles in ‘Oz The Great and Powerful’.

4. Reunited
Michael Caine and Morgan Freeman have worked together in the past, no less than five times. Their previous films include ‘Now You See Me’ and ‘The Dark Knight Rises’. Caine and Alan Arkin worked together once before, on ‘Woman Times Seven’, a whopping 50 years ago!

5. First Time is the Charm
Unlike Caine and Freeman, Alan Arkin has never worked with Morgan Freeman before this, although Freeman replaced Arkin in ‘Bonfire of the Vanities’.

6. Changes
In the original film, both Willie and Al die and Joe goes to prison for his crimes. Screenwriter Theodore Melfi decided to change this to something a little more upbeat. In an interview with creativescreenwriting.com, Melfi said “In this modern era, and even for me, I don’t want to see a movie where my heroes whom I’ve been fighting for and rooting for for two hours die or go to jail. I want to see them get ahead”.

7. Director
Zach Braff previously wrote and directed the feature films ‘Garden State’ and ‘Wish I Was Here’. ‘Going in Style’ is the first film that Braff has directed that he has not also written.

8. Actor
Speaking of Zach Braff, this is the first film that he has directed that he has not also acted in. Braff played Aidan in ‘Wish I was Here’ and Andrew in ‘Garden State’ but stays firmly behind the camera for ‘Going in Style’.

9. Return to the Screen
‘Grumpy Old Men’ and ‘Bye Bye Birdie’ actress Ann-Margaret stars as Annie in ‘Going in Style’. This is her first big screen role since ‘Lucky’ in 2010.