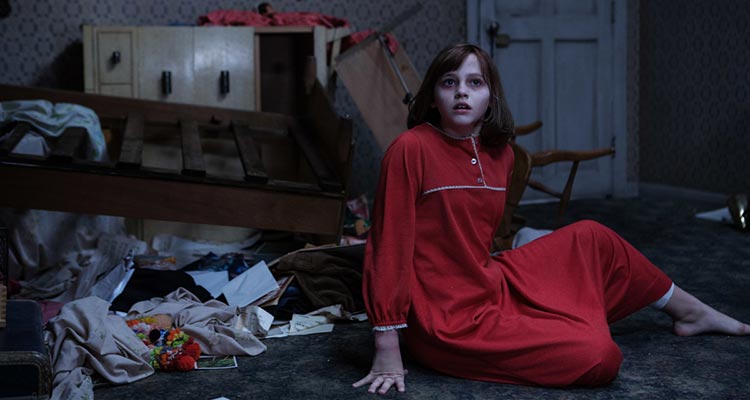 10 things you need to know about ‘The Conjuring 2’

Released in Irish cinemas this week, ‘The Conjuring 2’ follows paranormal investigators Ed (Patrick Wilson) and Lorraine Warren (Vera Farmiga) as they travel to London to meet Peggy (Frances O’Connor), a single mother at the end of her tether. Peggy believes that something evil has taken control of her home, and when her eldest daughter starts showing signs of demonic possession, Ed and Lorraine set out to help.

To celebrate the release of ‘The Conjuring 2’ in Irish cinemas, Movies.ie has gathered together 10 facts about the movie you really should know.

1. Meet the Warrens
Ed and Lorraine Warren – played in the ‘Conjuring’ films by Patrick Wilson and Vera Farmiga – are real people. Ed, who died in 2006, was a World War II US Navy veteran and former police officer who became a self-taught demonologist, author, and lecturer. Lorraine is a professed clairvoyant and a medium who worked closely with her husband.

2. True Stories
‘The Conjuring’ was inspired by the true events that also inspired ‘The Amityville Horror’, and this new sequel is also based on a true story; that of the Enfield Poltergeist, which allegedly terrorised a London family for two years from 1977.

3. Fiction?
The Enfield Poltergeist has been the subject of furious debate over the years, but has never truly been debunked, although many have claimed that one of the girls being haunted – Janet Hodgson – was the one behind the mysterious events in the house; a claim Janet Hodgson herself has always denied.

4. Inspiration
The Warren’s investigation of the Enfield case was also the subject of a 2015 drama, broadcast on Sky Living, titled ‘The Enfield Haunting’. This TV drama was well received, and starred Timothy Spall, Juliet Stevenson and Matthew Macfadyen.

5. Direction
James Wan, director of ‘The Conjuring’, has returned to direct this second film in the franchise. Since ‘The Conjuring’ was released in 2013, Wan has taken a tentative step away from horror to direct ‘Fast & Furious 7’.

6. Life Changing
Wan was offered a “life altering” amount of money to direct ‘Fast 8’, but he turned it down to direct ‘The Conjuring 2’. When announcing the start of production of ‘The Conjuring 2’ on his Instagram, Wan said that he felt “Rejuvenated to tell a scary story one more time”.

Here we GO. First day of official preproduction on The Conjuring 2. After a much needed three-month break to decompress from F7, it’s good to be back at work – meetings, designing, scripting, casting, scouting… I feel rejuvenated to tell a scary story one more time. #Conjuring2

7. Irish Connection
Irish actors Simon Delaney and Maria Doyle Kennedy are part of the cast of ‘The Conjuring 2’, playing Vic and Peggy Nottingham.

8. Blessing
After the set of the first film was the site of inexplicable eerie events, a Catholic priest was brought in to bless the set of ‘The Conjuring 2’ by the film’s producers. Eek!

9. Rating
Unlike ‘The Conjuring’, which was filmed with hopes of getting a PG-13 rating in the US, but ended up being rated R, ‘The Conjuring 2’ was both written and directed with the intention that it get an R rating, so it is not surprising that this is what it was rated in the US. In Ireland, the film is to be rated 15A.