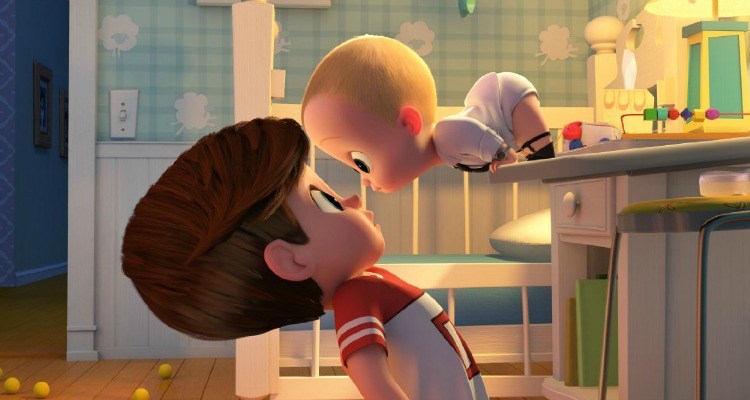 10 things you need to know about ‘The Boss Baby’

This week, ‘The Boss Baby’ is released in Irish cinemas. Starring Alec Baldwin as the voice of the title character, ‘The Boss Baby’ sees only child Tim (Miles Christopher Bakshi) suspicious of his new baby brother when he learns the Baby can not only talk, but seems to be hatching a plot against the company that his parents work for.

To celebrate the release of ‘The Boss Baby’, Movies.ie have gathered together 10 facts about the film that you really ought to know. Keep reading to find out more…

1. Source Material
‘The Boss Baby’ is loosely based on the book by Marla Frazee, which she has now written a sequel to, called ‘The Bossier Baby’. Frazee’s book saw the Baby being the Boss of the house, but the film expands the Baby’s role for the film, to being a baby with a mission.

2. Taking Over
As well as being a comedy caper with a twist, ‘The Boss Baby’ is also a story of sibling rivalry, with Tim’s parents not believing his story about the Baby being a business man with a plan because they put it down to sibling rivalry. Anyone with a younger brother or sister can certainly relate to this story!

3. Reunited
Lisa Kudrow also stars in ‘The Boss Baby’, as Tim’s mum. Kudrow and Alec Baldwin worked together 15 years ago on ‘Friends’, where Baldwin played Parker, a character who was Phoebe’s boyfriend. Parker and Phoebe broke up rather quickly when Parker’s habit for complimenting mundane things became annoying.

4. Trailer
The first trailer for ‘The Boss Baby’ was released on Monday October 17th, which happens to be National Boss’s Day in the US. Coincidence? We think not!

5. Vocal Stylings
Alec Baldwin is no stranger to voicing characters in animated films; as well as ‘The Fairly OddParents: Channel Chasers’ and ‘The SpongeBob SquarePants Movie’, Baldwin also voiced characters in two previous DreamWorks Animation films; he played Makunga in ‘Madagascar: Escape 2 Africa’, and North in ‘Rise of the Guardians’.

6. Cast
As well as Alec Baldwin and Lisa Kudrow, ‘The Boss Baby’ stars the voices of Jimmy Kimmel, Steve Buscemi and Tobey Maguire.

7. That’s the way the cookie crumbles
In the trailer, the Baby snatches a cookie away from another character, saying “Cookies are for closers!”. This is a parody of his famous line from Glengarry Glen Ross; “Coffee is for closers!”

8. Trial
Speaking of Baldwin’s famous line, director Tom McGrath was so sure that Baldwin was perfect for the role as the Baby, that he cut together an animated scene of an adorable baby with the audio of Baldwin’s profane ‘Glengarry Glen Ross’ speech just to make sure his suspicions were right.

9. Tale as old as Time
‘The Boss Baby’ released a new trailer this weekend, which was specifically designed to be played in cinemas before ‘Beauty and the Beast’. The trailer sees the Baby playing with toys that heavily resemble Lumiere and Cogsworth from the Disney film, before complimenting the audience on their cinemagoing choice, and reminding them that ‘The Boss Baby’ is out soon. Watch that hilarious new trailer here…