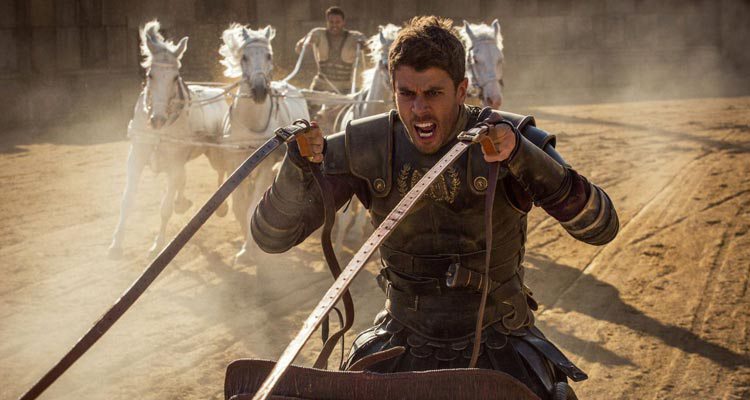 10 things you need to know about ‘Ben-Hur’

This week, the remake of ‘Ben-Hur’ is released in Irish cinemas. Directed by Timur Bekmambetov, the film tells the story of an exiled prince returning home after years at sea to seek revenge against her adopted brother.

To celebrate the release of ‘Ben-Hur’, Movies.ie has gathered together 10 facts about the film that you really need to know before you see the film.

1. Novel
‘Ben-Hur’ is based on the novel ‘Ben-Hur: A Tale of the Christ’ by Lew Wallace. The book was originally published in 1880 and is considered to be the most influential Christian book of the 19th century.

2. Remake
This 2016 film is the sixth screen adaptation of Lew Wallace’s novel. The first was the silent short ‘Ben-Hur’ released in 1907, the second was the silent epic ‘Ben-Hur: A Tale of the Christ’ released in 1925, the third was the critically acclaimed 1959 film ‘Ben-Hur’, the fourth was the animated direct-to-DVD ‘Ben Hur’ from 2003, and the fifth was a TV mini-series released in 2010.

3. Record Holder
The 1959 remake of ‘Ben Hur’ won a total of 11 Oscars which is a still standing record for most Oscar wins, shared with ‘Titanic’ and ‘Lord of the Rings: The Return of the King’.

4. Development
This new version of ‘Ben-Hur’ has been in development since 2013, when MGM acquired Keith R. Clarke’s script, which is based on Lew Wallace’s original book.

5. Choices
The lead role was originally offered to Tom Hiddleston, but he turned it down to do the upcoming ‘Kong: Skull Island’. Jack Huston took the role instead.

6. Recast
Wonder Woman herself, Gal Gadot was originally cast As Esther, but had to drop out of the film due to scheduling conflicts. Gadot was replaced by ‘Homeland’ actress Nazanin Boniadi.

7. Reluctant
Director Timur Bekmambetov was initially reluctant to direct this new version of ‘Ben-Hur’ as he did not want to tackle a remake of the 1959 film since it had so much impact and has such a strong legacy. Bekmambetov changed his mind when producer Sean Daniels convinced him to read the script.

8. Director
Speaking of director Timur Bekmambetov’s last major release was ‘Abraham Lincoln: Vampire Hunter’, which was also based on a beloved book, albeit a graphic novel.

9. Practicality
Director Timur Bekmambetov wanted to use as little CGI as possible in the film, relying instead on practical effects. Shooting took place in some of the same locations used in Mel Gibson’s ‘The Passion of the Christ’, with the rest of the film, including the famous chariot race, filmed in studio spaces in Italy.

10. When can I see ‘Ben-Hur’?
‘Ben-Hur’ is released in Irish cinemas on September 9th, with previews from September 7th. Watch the trailer below…