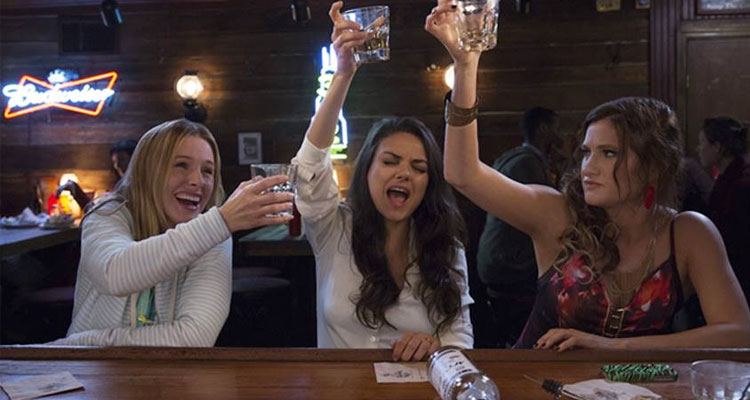 10 things you need to know about BAD MOMS

‘Bad Moms’ is released in Irish cinemas this week. The rom-com, starring Mila Kunis, Kristen Bell, Kathryn Hahn, Jada Pinkett Smith and Christina Applegate, tells the story of three over worked and stressed moms, who finally ditch their responsibilities and remember what it is like to have fun.

To celebrate the release of ‘Bad Moms’, Movies.ie has gathered together 10 facts about the movie that you really ought to know…

1. Original Cast
Originally, ‘Bad Moms’ was set to star Leslie Mann and be produced by Judd Apatow, but when the two dropped out due to scheduling conflicts, Mila Kunis, Christina Applegate, and Kristen Bell joined the film.

3. Motherhood
All of the lead actresses in the film are mothers, and Mila Kunis is now expecting her second child with husband Ashton Kutcher.

6. Directors
Directors Jon Lucas and Scott Moore made their directorial debut with the comedy film ‘21 & Over’, but had already written the screenplays for ‘Four Christmases’, ‘The Hangover’ and ‘The Change-Up’. This is their first female-led film.

7. Tik Tok
Singer Kesha was spotted on set and apparently filmed scenes with Mila Kunis, but sadly her scenes ended up being cut from the final film.

8. Together Again
Kristen Bell and Annie Mumolo previously starred together in ‘The Boss’, where they played enemies.

9. Cameos
Martha Stewart has a cameo in the film as herself, and Canadian blogger and YouTube personality Lilly Singh also appears in the film.