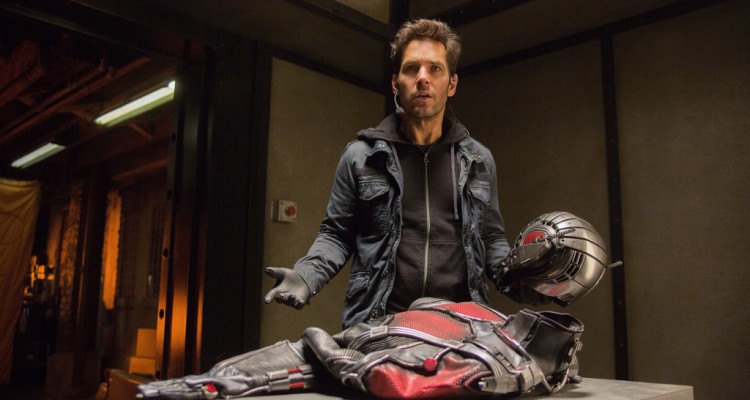 What will you watch in Irish cinemas this month…?

Directed by: Peyton Reed
Starring: Paul Rudd, Evangeline Lily, Judy Greer, Hayley Atwell, Michael Douglas
Release Date: July 17th 2015
After focusing on the big and the loud for their last few films, Marvel Studios scales down their hero this month, in the long-awaited Ant-Man.
Paul Rudd stars as Scott Lang, a petty criminal who, armed with a super suit that allows him to shrink in size but grow in strength, finds his inner hero. Along with his mentor, Dr Hank Pym (Michael Douglas), Lang must protect the ant-man technology, and – of course – save the world.

Directed by: Henry Hobson
Starring: Arnold Schwarzenegger, Abigail Breslin, Joely Richardson, Douglas M Griffin
Release Date: July 24th 2015
Did you ever wonder what would happen if Austrian Oak Arnold Schwarzenegger was pitted against zombies? Carnage, probably!? Well this month’s MAGGIE aims the answer that question. Schwarzenegger stars as Wade Vogel, a loving father in a dystopian future, who stays by his daughter Maggie’s (Abigail Breslin) side, even as she slowly turns into a zombie having been bitten. This is Schwarzenegger’s first zombie flick – and Breslin’s second, after ZOMBIELAND – so we expect good things, and a little bit of carnage.

Directed by: Travis Cluff & Chris Lofing
Starring: Cassidy Gifford, Pfeifer Brown, Ryan Shoos, Reese Mishler, Alexis Schneider
Release Date: July 17th 2015
Sometimes things are better left alone, and this is what the cast of a small town high school play – aptly titled ‘The Gallows’ – discover when they put the play on 20 years after it was first performed. A boy named Charlie was killed during the first performance of the play in 1993, and although the kids want to honour the tragic death, they end up awakening something that should have been left dormant.

Directed by: Anne Fletcher
Starring: Reese Witherspoon, Sofia Vergara, Matthew Del Negro, Michael Mosley, Robert Kazinsky
Release Date: July 31st 2015
In this odd couple comedy, Reese Witherspoon plays Rose Cooper a San Antonio cop, married to the job to such a degree that it has taken a serious toll on her personal life. The trouble is that Cooper’s enthusiasm for her job often gets her into trouble, so when she is assigned to protect a cartel informant’s wife, Daniella Riva (Sofia Vergara) she believes she has found a simple assignment, one that will allow her to redeem herself. Of course, the path to redemption never runs smooth…

THE LEGEND OF BARNEY THOMSON

Directed by: Robert Carlyle
Starring: Emma Thompson, Robert Carlyle, Ray Winstone, James Cosmo, Tom Courtenay
Release Date: July 24th 2015
This month, actor Robert Carlyle turns his hand to directing with THE LEGEND OF BARNEY THOMSON. Based on the darkly comic novels of Douglas Lindsay, Robert Carlyle stars as the title character, a Scottish barber who finds himself turned into a modern day Sweeney Todd, as he enters the world of a serial killer.

Directed by: Rupert Goold
Starring: Jonah Hill, James Franco, Felicity Jones, Ethan Suplee
Release Date: July 24th 2015
Although the last time we saw Jonah Hill and James Franco together on screen they were cleverly sending themselves up in THIS IS THE END, this month’s TRUE STORY is a dramatic thriller, in which Franco plays Christian Longo, a man whose wife and three children are murdered. When New York Times reporter Michael Finkel (Jonah Hill) discovers that Longo has stolen his identity, and decides to look into it, the investigation soon turns into a dangerous game of cat and mouse.

Directed by: Alan Taylor
Starring: Arnold Schwarzenegger, Emilia Clarke, Jai Courtney, JK Simmons, Matt Smith
Release Date: July 2nd 2015
Remember THE TERMINATOR? Where the T-800 was sent back in time to kill Sarah Connor and stop John Connor from ever being born, and Kyle Reese was also sent back to protect Sarah from the T-800? Well, this is the starting point for this month’s TERMINATOR GENISYS, but when Kyle (Jai Courtney) arrives in the past, he finds the original past changed, and meets an alternate Sarah Connor, who already knows about Skynet and Judgement Day. This, of course, means that Kyle Reese’s mission has changed…

SONG OF THE SEA

Directed by: Tomm Moore
Starring: David Rawle, Brendan Gleeson, Lisa Hannigan, Fionnuala Flanagan
Release Date: July 10th 2015
When he was little, and on the day his sister Saoirse (Lucy O’Connell) was born, Ben’s (David Rawle) mother disappeared into the sea. Filled with resentment toward his sister, Ben never warmed to her, and Saoirse spends her days silent. When they are taken to live with their grandmother in Dublin, however, Ben and Saoirse battle to get back to their isolated lighthouse home, with a little help from the faerie folk of Ireland.

Directed by: Pete Docter & Ronaldo Del Carmen
Starring: Amy Poehler, Mindy Kaling, Lewis Black, Phyllis Smith, Bill Hader, Richard Kind
Release Date: July 24th 2015
Joy (Amy Poehler) came into being as an emotion in Riley’s (Kaitlyn Dias) head the moment she was born, quickly followed by Sadness (Phyllis Smith), Fear (Bill Hader), Disgust (Mindy Kaling) and Anger (Lewis Black). As Riley has grown, they have protected her, and helped her make decisions, but when Riley’s family moves from Minnesota to San Fransisco, and Joy and Sadness become lost in Riley’s mind, they must band together to return to headquarters and help Riley deal with the changes in her life.

Directed by: Christopher McQuarrie
Starring: Tom Cruise, Simon Pegg, Jeremy Renner, Rebecca Ferguson, Ving Rhames
Release Date: July 30th 2015
This time out, Ethan Hunt (Tom Cruise) and his team take on The Syndicate; an international rogue organisation who are determined to destroy the IMF. Along the way, they encounter Ilsa (Rebecca Ferguson), a woman as beautiful as she is mysterious, and must work out whether they can trust this enigmatic newcomer.